Diabetes reversed in mice for 4 months, after one-time implant from Israeli lab


Using a one-time implant, Israeli scientists have corrected blood sugar levels in diabetic mice for months — and say the procedure may be developed for humans.

The researchers grew healthy tissue in a lab and transplanted it into eight mice with Type 2 diabetes. This tissue acts as a channel for glucose into the body, and blood glucose levels dropped in all the mice by an average of 26 percent. The levels stayed in the normal range for the entire four months of the study, while in control groups there was no drop in blood sugar levels.

“This could potentially, in the future, give human patients with Type 2 diabetes the possibility of having an implant and then going for a few months without taking any medications,” said Rita Beckerman, who conducted the research with Prof. Shulamit Levenberg.

The study, conducted at the Technion-Israel Institute of Technology, is newly peer-reviewed, and published in the journal Science Advances.

Beckerman isolated muscle stem cells from the mice being treated, and modified the cells genetically to make them express a very high quantity of GLUT4 “transporters” in the body. 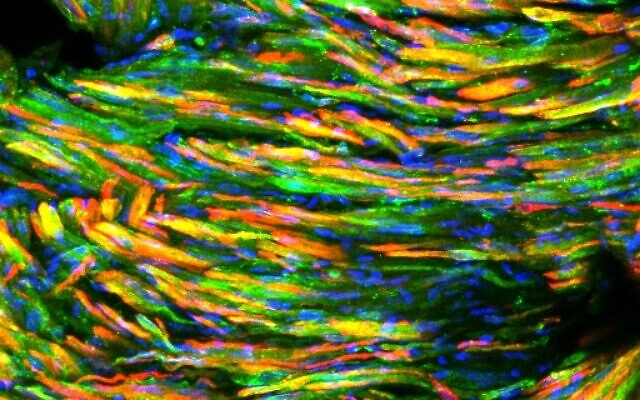 “These GLUT4 cells were then grown to form an engineered muscle tissue, and we transplanted the tissue back into the abdominal muscle of diabetic mice,” said Beckerman.

The engineered cells proceeded to absorb sugar correctly, improving blood sugar levels, and also induced improved absorption in the mice’s other muscle cells. After this one treatment, the diabetes of the mice was reversed. Their blood sugar levels remained lower, and they had reduced levels of fatty liver normally displayed in Type 2 diabetes.

Beckerman said: “It’s such a novel approach that we really didn’t know what to expect, but we were extremely happy with the result.”

You get Israel news… but do you GET it? Here’s your chance to understand not only the big picture that we cover on these pages, but also the critical, juicy details of life in Israel.

In Streetwise Hebrew for the Times of Israel Community, each month we’ll learn several colloquial Hebrew phrases around a common theme. These are bite-size audio Hebrew classes that we think you’ll really enjoy.

Already a member? Sign in to stop seeing this


You’re serious. We appreciate that!


We’re really pleased that you’ve read X Times of Israel articles in the past month.

That’s why we come to work every day – to provide discerning readers like you with must-read coverage of Israel and the Jewish world.

So now we have a request. Unlike other news outlets, we haven’t put up a paywall. But as the journalism we do is costly, we invite readers for whom The Times of Israel has become important to help support our work by joining The Times of Israel Community.

For as little as $6 a month you can help support our quality journalism while enjoying The Times of Israel AD-FREE, as well as accessing exclusive content available only to Times of Israel Community members.

Already a member? Sign in to stop seeing this

Whole grain food and the economics of type 2 diabetes

What happens to our body when we do not exercise?